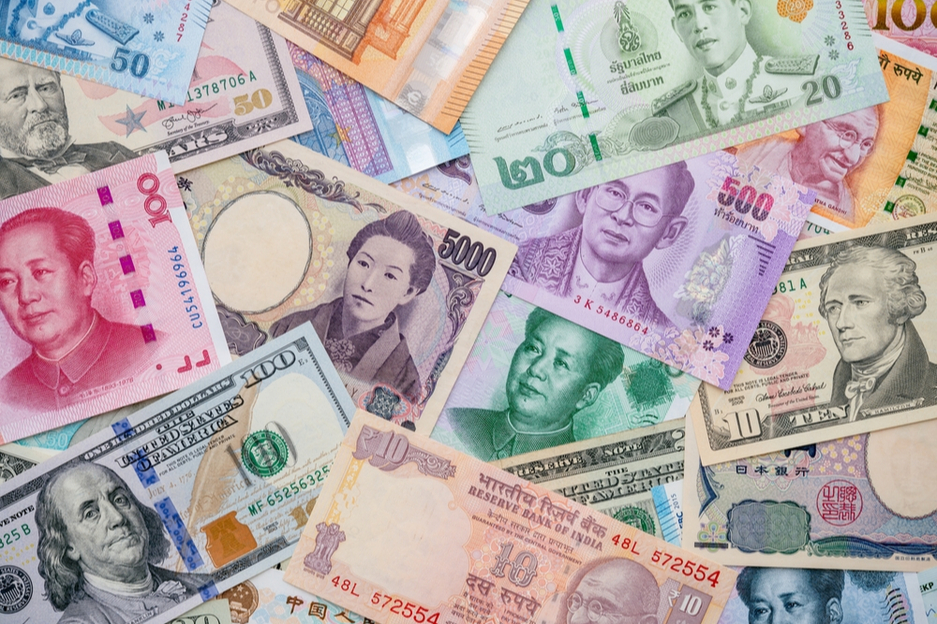 The dollar climbed to fresh 20-year highs on Monday, with the dollar index rising above the 108 level. Global recession concerns are propping up the safe-haven dollar, while competing assets, such as the Euro and the Sterling, are pushed down. US Bond yields retreated a little on Monday, with the US 10-year treasury note yielding approximately 3%.

In its latest policy meeting, the US Federal Reserve voted to raise its benchmark interest rate by 75 points, taking aggressive action against inflation. High US inflation rates are forcing the Fed to tighten its monetary policy. PPI in June climbed 0.8% for the month and 10.8% on an annual basis, driven by rising costs of food and energy. Another rate hike of 75 base points is expected for July and is already been priced in by markets, catapulting the dollar to record highs. As markets have mostly priced in a steep interest rate hike this month, hawkish Fed rhetoric may need to continue with renewed vigor to boost the dollar further.

The euro hit a fresh two-decade low against the dollar on Monday, with the EUR/USD rate descending to the 1.005 level for the first time in 20 years. The Euro has been pushed down by the looming EU energy crisis and a rising dollar. If the currency pair goes up, it may encounter resistance at 1.078. If the EUR/USD continues to fall, it may find support near the 20-year low of 0.985.

Increasing signs that the Eurozone economy is slowing down and may tip into recession have pushed the single currency down. Struggling Eurozone economies, rampant inflation, and a looming energy crisis in the EU create a toxic combination.

Concerns of an imminent energy crisis in the Eurozone keep the Euro down. After the EU announced a gradual ban on Russian oil imports, Russia retaliated by limiting its natural gas exports to certain EU countries. On Monday, the Nord Stream 1 gas pipeline was shut off for routine maintenance until the 21st of July. This is Germany’s biggest single gas pipeline, supplying the country with most of its imported natural gas from Russia. Gas supplies via this pipeline from Russia have already been reduced to 40% and reports that Russia might use the maintenance period to cut off completely gas supplies are pushing the Euro down. In addition, a strike of Norwegian oil and gas workers last week has intensified fears of an energy crisis in the EU.

Eurogroup meetings were held on Monday but did not cause high volatility in Euro price. Italian sales data released on Monday exceeded expectations, providing a little support for the currency.

Worries about high debt levels in some Eurozone countries were revived following the ECB’s announcement to end the quantitate easing program in July. The ECB is struggling to deal with financial fragmentation in the EU caused by the wide range of lending rates across Eurozone states, limiting the ECB’s monetary tightening options.

Stagnating the Eurozone economy increases the odds that the ECB may be forced to moderate its plans for raising interest rates to combat high inflation. In contrast, the Fed’s steep rate hikes in the past few months, emphasize the gap between ECB and Fed policies, putting pressure on the Euro. Eurozone inflation in June has reached a record high of 8.6%, an increase from 8.1% in May, driven primarily by rising food and energy costs.

German Buba President Nagel is due to deliver a speech on Tuesday, which is expected to attract the attention of market participants. Nagel has raised a dissenting voice within the ECB, disapproving of the Central Bank’s plan to deal with financial fragmentation within the EU.

The Sterling retreated near a two-year low against the dollar on Monday. The GBP/USD rate traded near the 1.186 level, pushed down by political pressures. If the GBP/USD rate goes up, it may encounter resistance near the 1.240 level, while if it declines, support may be found near 1.140.

On Monday, BOE Governor Andrew Bailey testified on the Bank of England Financial Stability Report before the Treasury Select Committee, in London. Bailey warned British homeowners of the imminent rise of home mortgages in the UK, as a result of the increase in BOE interest rates. His speech was considered more hawkish than expected, boosting the pound.

The British PM, Boris Johnson, had been struggling to keep his seat for some time, with political instability pushing the Sterling down. Last week, UK Chancellor of the Exchequer Rishi Sunak and Health Secretary Sajid Javid announced their resignations from Boris Johnson’s government. This was the last straw for Boris’ ailing administration, finally forcing the British PM to announce his resignation on Thursday, although Johnson will continue to serve until a new leader is in place.

Markets initially reacted favorably to Johnson’s resignation and the Sterling gained strength as the climate of political uncertainty in the UK had been reducing investor confidence in the currency. Johnson’s resignation was considered to be a matter of time and had already been largely priced in by markets. As however, the matter of his succession will have to be decided soon, and there is renewed political uncertainty adding pressure on the Sterling.

Britain’s uncertain economic outlook limits the BOE’s ability to shift towards a more aggressively hawkish policy. Stagflation is a risk for the UK economy, as for many other countries, as economic stagnation coupled with rising inflation creates a toxic mix for the economy. The BOE is adopting a moderate stance, trying to strike a balance between battling inflation and supporting the sluggish economy. With the Fed moving at an aggressively hawkish pace, the divergence in monetary policy between the Fed and the BOE is highlighted, putting pressure on the Sterling.

Several important economic data are scheduled to be released on Tuesday for the UK, especially BRC Retail Sales Monitor and 10-y Bond Auction. In addition, BOE Governor Andrew Bailey is due to deliver a speech Tuesday about the economic landscape at an event hosted by the Official Monetary and Financial Institutions Forum, in London. His speech may affect the currency considerably, as the BOE policy direction comes again into focus, against a backdrop of political instability and poor economic outlook.

The Yen plummeted on Monday, pushed down by strong political developments, with the USD/JPY pair pushing past the 136.7 level resistance and climbing to the 137.7 level. If the USD/JPY declines, support might be found near the 134.2 level and further down at 131.7. If the pair climbs it may find resistance at the 1998 high of 147.7.

Rising global recession fears have sparked a risk-aversion sentiment, boosting safe-haven assets. The dollar’s impressive rally, however, has weighed down competing currencies, such as the Yen.

The assassination of former Japanese Prime Minister Shinzo Abe ahead of the elections in Japan has affected the political climate in the country and has sent economic ripples throughout the world, triggering a risk-aversion sentiment. The Yen retreated following the assassination of the ex-prime minister, who was campaigning for the upcoming elections when he was shot.

Japan’s ruling block achieved a sweeping victory on Monday, for the Upper House of Parliament. The strong win could help Japan PM Fumio Kishida consolidate his rule and push forward his economic agenda. Kishida has not been a supporter of Abenomics, the economic system established by former PM Abe to boost the economy in Japan. Markets however perceived that Kishida will not move away from the current ultra-easy monetary policy at least in the short-term, and the Yen plummeted.

Inflation in Japan has remained above the BOJ’s 2% target in June, reaching 2.1% on an annual basis. The combination of a weak currency and rising inflation is burdening Japanese households.

Several important economic data for Japan are scheduled to be released on Monday and may cause some volatility in Yen price.