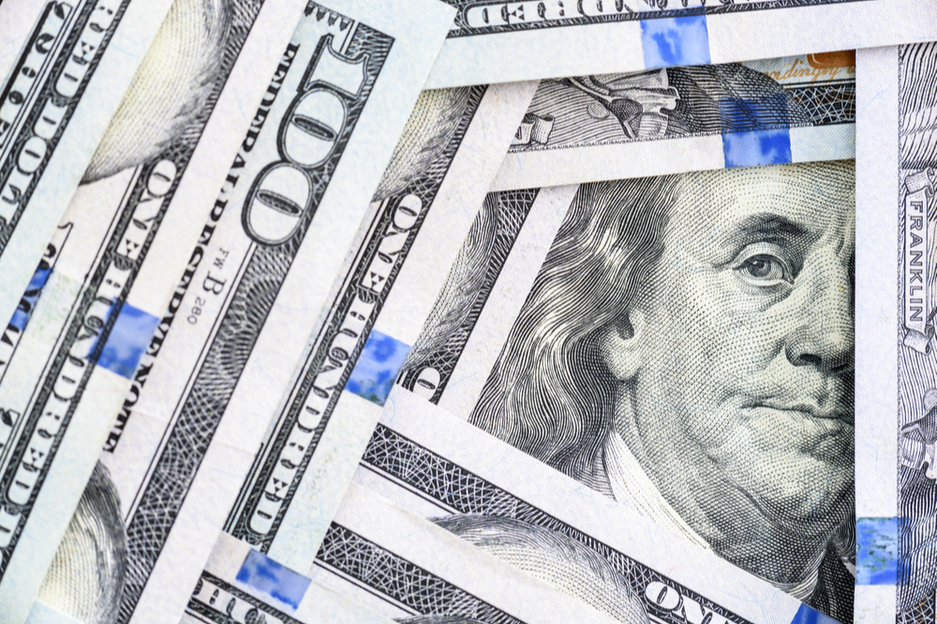 The dollar plummeted on Wednesday on reduced rate hike expectations. The dollar index dropped from the 107 level in early trading, to nearly 106 later in the day. US Treasury yields also declined, with the US 10-year bond dropping from 3.8% to 3.7%.

The minutes of latest FOMC minutes were released on Wednesday and were more dovish than expected. The minutes revealed that many FOMC officials were in favor of slowing rate hikes soon. The dollar collapsed following the release of the FOMC meeting minutes, as future rate hike expectations were diminished.

US Flash Services and Manufacturing PMI data, which are important indicators of economic health, were also released on Wednesday. These fell below expectations, putting pressure on the dollar. Flash Services PMI in November dropped to 46.1 in November from 47.8 in October, against expectations of 48.0. Flash Manufacturing PMI in November retreated to 47.6 from 50.4 in October, versus the 50.0 expected. Both PMI indicators fell below the threshold of 50, which denotes expansion in November. Contraction in these important economic sectors could be a sign of potential recession in the US. New home sales and Revised UoM Consumer Sentiment data on Wednesday however, were optimistic providing support for the dollar.

Fed rhetoric is especially important this week as it may provide hints on the US central bank’s direction after recent soft inflation data. Fed rhetoric remained hawkish on Tuesday, although cautiously so, putting pressure on the dollar. The consensus between FOMC members seems to be that although inflation is cooling, further tightening will be required to bring inflation down consistently to the central bank’s 2% target.

Thursday is Thanksgiving Day, which is a Bank Holiday in the US. No financial news is scheduled to be released on Thursday and relatively low volatility is expected for the dollar.

The Euro edged higher on Wednesday, benefitting from the dollar’s decline. EUR/USD climbed above the 1.036 level resistance, touching 1.040. If the EUR/USD pair declines, it may find support at the parity level and further down near 0.973. If the currency pair goes up, it may encounter further resistance near 1.061.

Economic activity indicators released on Wednesday for the Eurozone were mostly optimistic, providing support for the currency. Eurozone Flash Manufacturing and Services PMI data for November exceeded expectations. EU Flash Manufacturing PMI printed at 47.3 against expectations of 46.0, increasing significantly from 46.4 in October. EU Flash Services PMI was also higher than expected in November, matching October’s print of 48.8 and beating expectations of a decline to 48.0. Germany, Eurozone’s largest economy lead the improvement in the manufacturing and services sectors. Germany’s Flash Services PMI in November printed at 46.4, which was slightly lower than October’s 46.5 but exceeded expectations of 46.1. German Flash Manufacturing PMI in November was also higher than expected, rising to 46.7 from 45.1 in October, versus predictions of a decline to 44.9. The manufacturing and services sectors in the EU remain well below the threshold of 50, which denotes expansion though. Indications of contracting economic activity in the Eurozone add to recession concerns, putting pressure on the Euro.

Eurozone economic outlook is poor, showing signs that the EU is entering a recession, limiting the ECB’s ability to raise interest rates. Eurozone GDP grew by 0.2% in the third quarter of 2022 as expected. Economic expansion is slowing down, following a 0.7% GDP growth in the second quarter. Annual EU GDP growth was in line with expectations, printing at 2.1%. Analysts are predicting stagnation later this year and in the first quarter of 2023.

Even though further ECB rate hikes seem certain, the magnitude of the hikes may decrease if the EU shows signs of entering a recession. Stagflation becomes a real headache for the ECB, which will be forced to battle inflation without the support of a robust economic background. In its latest monetary policy meeting, the ECB raised its interest rate by 75 basis points to 1.5%, the highest since 2009. Soaring EU inflation rates are forcing the central bank to hike rates aggressively to reduce price pressures. Market odds are currently in favor of a 50-bps rate hike at the ECB’s next monetary policy meeting.

Economic activity indicators scheduled to be released on Thursday for the Eurozone include German IFO Business Climate and Belgian NBB Business Climate. The Accounts of the latest ECB Monetary Policy Meeting are also due on Thursday and may provide information on the ECB’s future policy direction.

The Sterling edged higher on Wednesday, as the dollar retreated. GBP/USD shot up above the 1.202 level resistance, climbing to 1.207. If the GBP/USD rate goes up, it may encounter further resistance near 1.228, while support may be found near 1.133 and further down near 1.114.

UK Flash Manufacturing and Services PMI exceeded expectations on Wednesday. Flash Manufacturing PMI in November printed at 46.2, matching October’s print, against the 45.7 predicted. UK Flash Services PMI was also unchanged in November, printing at 48.8, against a lower print of 48.0 expected. The print for both sectors remained below the 50 thresholds for expansion, indicating that economic activity is reduced and that the British economy is showing signs of recession. Even though both the manufacturing and services sectors did not expand this month, slower than expected contraction boosted the Sterling.

UK CBI Industrial Order Expectations are scheduled to be released on Thursday and may provide information on the economic outlook of the UK.

The Yen rallied on Wednesday as the dollar plummeted, with the USD/JPY pair touching the 139.2 level. If the USD/JPY pair declines, it may find support at 138.4, while further support may be found at 130.4. If the pair climbs, it may find resistance at the psychological level of 145.0 and further up at 146.9.

Wednesday was a Bank Holiday in Japan in observance of Labour Thanksgiving Day and the Yen exhibited reduced volatility throughout the day. The USD/JPY rate was primarily affected by the dollar’s collapse on Wednesday.

BOJ Core CPI data on Tuesday exceeded expectations, providing support for the Yen. BOJ CPI for October rose to 2.7% on an annual basis, against 2.0% in September and 2.2% predicted. Hotter-than-expected inflation in Japan is mainly due to the high cost of imported energy. National Core CPI data released last week also indicated that inflation in Japan continues to rise. National CPI rose by 3.6% year-on-year in October, beating expectations of a 3.5% rise. October’s data are much higher than September’s 3.0% print, indicating that price pressures continue to rise in Japan.

Japanese authorities recently staged interventions to support the Yen, as evidenced by the currency’s sudden surges after the USD/JPY moved above the psychological level of 150. The Japanese government cannot support the Yen indefinitely, however, as continuous interventions would not be sustainable.

Flash Services and Manufacturing PMI data due on Thursday are important indicators of economic health and may provide information on the economic outlook of Japan.