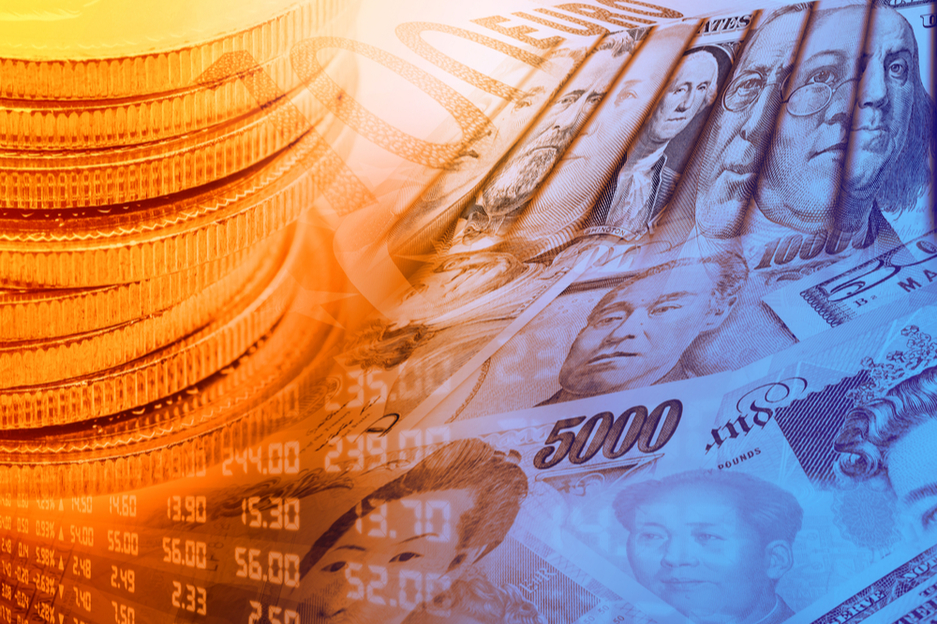 After a tumultuous day for stocks, commodities and currencies on Monday, global markets continued showing high volatility on Tuesday. Global stock markets plummeted on Monday morning over fears of a Russian incursion into Ukraine and the Dow went down by over 1,000 points but rallied again later in the day. Moscow’s Moex stock index had sunk by more than 5.5 per cent on Monday and the Rouble lost more than 2 per cent against the dollar and tumbled to its weakest level in more than two years after rising tensions between Russia and Ukraine triggered a massive sell-off on Monday. The Rouble recovered a little on Tuesday, but continued trading close to a 14-month low against the dollar.

The dollar continued gaining strength on Tuesday, ahead of Wednesday's Federal Reserve meeting. Overall, the dollar exhibited low volatility, as traders awaited the outcome of the FOMC meeting on Wednesday and the dollar index ranged between 95.95 and 96.25.

The US Federal Reserve’s much-anticipated meeting is going to be concluded on Wednesday and markets are on the alert for its outcome. After the meeting, the Fed will issue a statement announcing its first interest rates for 2022 and many traders expect an announcement that the first rate hike of 2022 will take place in March. Increased volatility is expected for the dollar after the end of the meeting, as traders will scan the Federal Reserve’s statement to gain insight into the Central Bank’s future monetary policy. The Federal Reserve’s hawkish stance is no secret and investors are expecting the US Central Bank to raise interest rates at least three times this year. There are even expectations that the US Central Bank might raise interest rates four times and adopt a more aggressive policy in an effort to combat inflation. Investors will expect the Fed to signal the start of the rate hikes on Wednesday and announce the beginning of a tighter monetary policy. A more hawkish than anticipated stance might boost the dollar, which has already gained strength amid expectations of a rate hike. If the Federal Reserve does not meet expectations though, and issues a more moderate statement, the USD price may go down.

The US Crude Oil Inventories and other indicators are scheduled to be released on Wednesday, but all eyes will be on the outcome of the Fed meeting.

Tuesday was a slow day for the Euro, as traders await Fed announcements on Wednesday, in expectation of a Fed rate hike announcement.

The Euro retreated against the dollar early on Tuesday, breaking through its 1.311 support but regained a little strength later in the day. The pair is still trading below its support and the outlook for EUR/USD is slightly bearish. If the currency pair goes up again, it may find resistance at 1.138 and further up at 1.148.

The German 10-year Bond Auction will take place on Wednesday and may cause some volatility for the Euro, although investors’ focus will be on the outcome of the Fed meeting on Wednesday.

This week the sterling is expected to be influenced mainly by political developments, as Boris Johnson’s Premiership is on the line. The increased political risk in the UK has been affecting the pound, which has been declining for the past week. The UK Prime Minister has come under pressure these past couple of weeks, over revelations that he attended parties in Downing Street during lockdown last May. The so-called ‘party gate’ investigation into the incident is due this week, and the outcome of this investigation may force Boris Johnson to resign if evidence is presented that he lied to the parliament and knowingly attended an event that was not work-related.

The sterling gained some strength on Tuesday, with the GBP/USD rate climbing above 1.351, but still trading below its 1.357 support. The outlook for the currency pair is still slightly bearish, but if the GBP/USD climbs again, there may be resistance at the 1.375 level. The main factor that is expected to influence the currency pair exchange rate is the conclusion of the Fed meeting and the FOMC Press Conference.

USD/JPY traded sideways on Tuesday, around the 113.9 level and the outlook for the pair is slightly bearish. If the currency rate continues falling, it may find support at 113.48, and further down at 112.55. If the pair starts recovering, resistance may be found at 115.6, while the 116 level may present another resistance point.

Last week the bank of Japan decided to maintain its ultra-accommodating monetary policy, with BOJ Governor Haruhiko Kuroda, stating that the central bank had no intention of raising interest rates. The BOJ also revised its inflation forecast for fiscal year 2023 to 1.1% from 1.0%, with Kuroda appearing content for inflation to stay below its 2% goal for years.

The BOJ Summary of Opinions is scheduled to be released on Wednesday, which includes the BOJ's projection for inflation and economic growth, but this is not expected to create high volatility for the currency in light of last week’s BOJ statement.