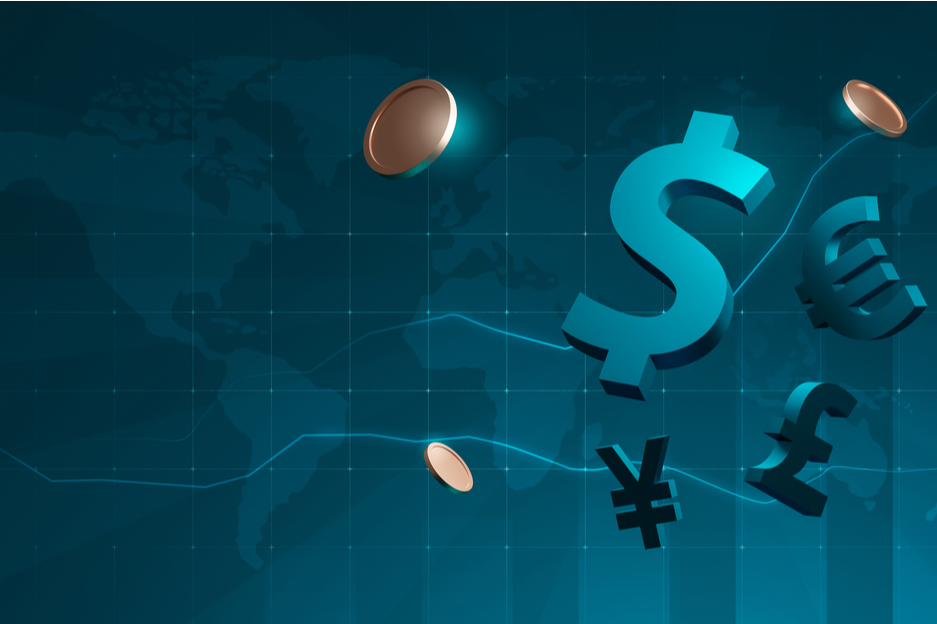 Russian stocks and bonds plummeted on Monday as the crisis with Ukraine continues and many investors believe that Russia will soon move against Ukraine. US President Joe Biden has warned Russia that an invasion against Ukraine would have serious consequences, while the EU has threatened Russia with "massive" economic sanctions. Moscow’s Moex stock index sank by more than 5.5 per cent on Monday and the Ruble lost more than 2 per cent against the dollar and tumbled to its weakest level in more than two years. Global stock markets plummeted on Monday morning over fears of a Russian incursion into Ukraine and the Dow went down by over 1,000 points but rallied again later in the day.

The dollar started out strong on Monday, but dipped later in the day, after US Flash Manufacturing Purchasing Managers Index and Flash Services PMI turned out to be lower than expected. Overall, the dollar exhibited low volatility on Monday, as traders awaited the outcome of the FOMC meeting on Wednesday and the dollar index ranged between 95.71 and 96.13.

Investors are poised to react to the Fed’s announcements later in the week, after the highly anticipated FOMC January two-day meeting, which is scheduled on January 25-26.  The Fed will issue a statement after the meeting, announcing its first interest rates for 2022. A tightening of the US Central Bank’s monetary policy is largely expected and at least three rate hikes have already been priced in, boosting the dollar. Traders expect the Fed to signal an interest rate hike as early as March and to gauge the future monetary policy from the final statements issued on Wednesday. If the Fed’s statement is more hawkish than anticipated, hinting at a fourth rate hike and a more aggressive stance to combat inflation, this will support the dollar. If the Federal Reserve issues a more moderate statement though, the USD price may go down.

The US Conference Board Consumer Confidence and other minor indicators are scheduled to be released on Tuesday, which may cause some volatility for the dollar, as these are indicators of economic health. More importantly, the FOMC January two-day meeting will start on Tuesday and, although official statements will not be released until Wednesday, the event may create some volatility.

The German Flash Manufacturing Purchasing Managers Index and the German Flash Services PMI were released on Monday, which are leading indicators of economic health. The PMI data released were more positive for the economy than expected and caused some volatility for the euro, which had dipped a little before the announcement of the indicators and then recovered when data exceeded expectations. Traders are mostly poised to react to the Fed announcements on Wednesday though, and markets are slow in expectation of a Fed rate hike.

The Euro retreated against the dollar early on Monday, testing its 1.311 support but regained strength later in the day. If the currency pair goes up again, it may find resistance at 1.138 and further up at 1.148, while if it declines further, it may go through its 1.131 support.

The German ifo Business Climate is scheduled to be released on Tuesday, along with the Belgian NBB Business Climate data. These are indicators of economic conditions in the EU, but are not expected to create high volatility for the euro.

The sterling dipped on Monday, as the political uncertainty is starting to weigh the pound down. The UK Prime Minister has come under pressure these past couple of weeks, after revelations that he attended parties in Downing Street during lockdown last May. Civil Servant Sue Gray’s so-called ‘party gate’ investigation is expected to be released this week and the outcome is due any day. If the investigation concludes that Boris Johnson lied to the parliament and knowingly attended an event that was not work-related, he will face even more pressure to resign and may get a vote of no-confidence from his own party if he doesn’t.

The UK Flash Manufacturing Purchasing Managers Index and the German UK Flash Services PMI were released on Monday, which are leading indicators of economic health. With Omicron cases soaring in the UK, the PMI data were lower than expected, indicating a negative state of the economy and pushing the sterling further down.

The GBP/USD rate fell as low as 1.343 on Monday morning, before recovering a little and climbing to 1.349. The outlook for the currency is bearish, but if the GBP/USD climbs again, there may be resistance at the 1.375 level.

On Tuesday, UK Public Sector Net Borrowing and CBI Industrial Order Expectations are scheduled to be released. These provide a measure of the state of the economy and may have some influence on the currency. The pound however is expected to be influenced mainly by the political situation this week.

Last week traders anticipated the release of the BOJ’s report, in case it might contain hints of a hawkish shift in Japan’s monetary policy. BOJ Governor Haruhiko Kuroda, however, stated decisively that the central bank had no intention of raising interest rates and the Yen settled close to its previous levels. The BOJ also revised its inflation forecast for fiscal year 2023 to 1.1% from 1.0%, with Kuroda appearing content for inflation to stay below its 2% goal for years.

USD/JPY traded sideways on Monday, around the 113.7 level and testing its 113.48 support and the outlook for the pair is slightly bearish. If the currency rate continues falling, it may find support at 113.48, and further down at 112.55. If the pair starts recovering, resistance may be found at 115.6, while the 116 level may present another resistance point.

The annual BOJ Core Consumer Price Index is scheduled to be released on Tuesday, which is an indicator of inflation, but this is not expected to create high volatility for the currency in light of last week’s BOJ statement.