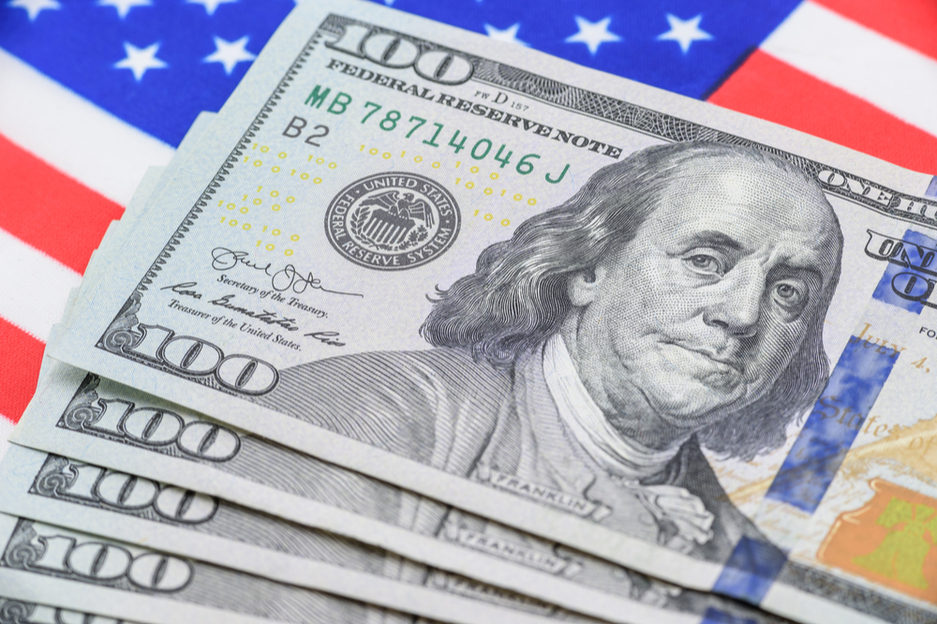 In a surprise move, the US Federal Reserve voted to raise its benchmark interest rate by 75 points on Wednesday, taking aggressive action against inflation.

The dollar index spiked to 105.7 immediately after the announcement of the Fed interest rate, but fell below 104.8 later, exhibiting high volatility. Bond yields were also volatile on Wednesday, with the US 10-year treasury note yielding approximately 3.4%.

In the past few weeks, FOMC members pointed to a 50 base point rate hike, indicating that the Fed intended to move gradually towards monetary policy normalization. In its monetary policy meeting on Wednesday however, the Fed raised its benchmark interest rate by 75 base points, bringing its interest rate to 1.75%. Record high US inflation rates have forced the Fed to ramp up its efforts by performing its steeper rate hike since 1994. With 10 out of the 11 FOMC members voting in favour of the rate hike, the Fed sent a clear signal that it plans to tackle soaring inflation rates.

A strong probability of a 75 bps rate hike had already been priced in by markets ahead of the Fed meeting, although market expectations were mostly in favour of a 50 bp rate hike. The dollar had been overbought in the past few days in anticipation of a hawkish Fed meeting and the Fed’s announcement fell within market expectations driving the dollar down. Markets reacted strongly to the Fed interest rate announcement as well as the ensuing FOMC Press Conference, causing high volatility in the price of the dollar. Over the next couple of days, we expect the dollar price to stabilize, as markets will have had time to absorb the news.

Several economic indicators are scheduled to be released on Thursday for the US, including Philly Fed Manufacturing Index and Unemployment Claims. These data may affect the dollar in the wake of Wednesday’s Fed policy meeting. On Thursday however, markets are expected to be influenced mostly by the aftereffects of the Fed meeting and the dollar price may regain its equilibrium, as markets will have time to digest Wednesday’s news.

The Euro was boosted early on Wednesday, as an emergency ECB meeting raised expectations of a more hawkish monetary policy. The EUR/USD rate rose above 1.050, and exhibited high volatility later in the day, following the announcement of the Fed interest rate. If the currency pair goes up, it may encounter resistance at 1.078. The currency pair is currently testing the support at the 1.036 level that represents 2016 low and, if it falls further, it may find support near a 20-year low of 0.985.

The ECB council held an unscheduled meeting on Wednesday to discuss the recent market selloff of government bonds, following reports that the EU Central Bank was planning to gradually start raising its interest rate. In an unexpectedly hawkish shift, ECB President Christine Lagarde stated after the meeting that the ECB would not be dominated by fiscal considerations. Lagarde also stressed the importance of bringing inflation down to its 2% target, further raising expectations of a steeper rate hike at the next monetary policy meeting in July.

The Fed’s decisive 75 base point rate hike on Wednesday, emphasized, even more, the gap between ECB and Fed policies, putting pressure on the Euro. In its monetary policy meeting last week, the ECB kept its interest rate unchanged and issued a Monetary Policy Statement that was more dovish than expected, driving the Euro down. The ECB pointed in its statement to a small rate hike of 25 base points at its next meeting in July, which was more modest than expected, as markets were pricing in an interest rate increase of up to 50 base points. The ECB has kept its interest rates below zero for over a decade and an increase in interest rates represents a hawkish turn in its monetary policy, to counter unprecedented inflation rates.

Economic growth in the EU has been stalling after the pandemic, raising fears of a potential recession. Even though the ECB has pointed clearly to a shift towards a more hawkish policy, stagnating Eurozone economies limit the ECB’s flexibility to increase interest rates to combat high inflation. Inflation in the Eurozone climbed to record highs in May, reaching 8.1%, driven by rising food and energy costs. In addition, EU members recently announced a gradual ban on Russian oil imports. Concerns about rising energy costs in the EU that would bring inflation even higher up are putting pressure on the Euro.

This week only minor economic indicators are scheduled to be released for the Eurozone, which is not expected to generate high volatility for the currency. Eurogroup meetings are also scheduled to take place on Thursday and may cause some volatility in the currency, although the Euro is more likely to be affected by the aftermath of Wednesday’s FOMC meeting.

The sterling gained strength against the dollar on Wednesday, following the Fed meeting. The GBP/USD rate rose to 1.220, as the dollar weakened. If the GBP/USD rate goes up, it may encounter resistance near the 1.308 level, while if it declines, support may be found near 1.200 and further down near 1.140.

The Sterling has been under pressure by disappointing economic data, which cripple the BOE’s ability to move toward a more hawkish direction. Economic data released this week for the UK fell below expectations, indicating slow economic growth and putting more pressure on the currency. Monthly GDP fell to -0.3% on Monday, while Unemployment Rate rose to 3.8% on Tuesday. Last week, the UK PM Boris Johnson won the vote of no-confidence against him by a narrow margin and the bleak political climate is reducing investor confidence in the Sterling.

Headline inflation in the UK rose to a new 40-year high of 9% in April, while core inflation hit 6.2%. The cost of living in the UK has been increasing, driven primarily by the high cost of energy imports, putting pressure on UK households. Stagflation is a risk for the UK economy, as for many other countries, as economic stagnation coupled with rising inflation creates a toxic mix for the economy.

The Fed’s 75 base point rate hike highlights the divergence in monetary policy between the Fed and the BOE. If Thursday’s BOE meeting falls short of market expectations, it may drive the pound further down. Although the BOE started the year with a strong hawkish policy, it has recently backed down and moderated its stance, weighted down by the still fragile British economy.

This week, the primary focus of investors will be the BOE monetary policy meeting on Thursday. Coming just a day after the Fed’s policy meeting, the outcome of the BOE’s meeting and the ensuing Monetary Policy Statement, are expected to have a strong impact on the Sterling. Britain’s uncertain economic outlook may force the BOE to hold back from shifting to an aggressively hawkish monetary policy to tame soaring inflation rates. A 25-base point rate hike is widely expected in this week’s monetary policy meeting, which will help the BOE to strike a balance between battling inflation and supporting the sluggish economy. Markets are pricing in an interest rate increase of over 30 base points, with the odds in favour of a 25 bp rate hike but some traders expect a 50 bp rate hike. Although this will be the fifth consecutive rate hike for the BOE, something that hasn’t been done in 25 years, market participants may consider a 25 bp rise in interest rate a sign that the BOE is slowing down its pace, which may drive the Sterling down, especially coming after the Fed’s strong rate hike.

The yen gained strength against the dollar on Wednesday, with the USD/JPY pair falling to 133.5. If the USD/JPY declines, support might be found near the 130.5 level and further down at the 127 level. If the pair climbs again, it may find resistance near the 2002 high of 135.3.

The dollar retreated on Wednesday following the Fed’s announcement, raising the appeal of competing assets, such as the Yen.

The Yen has been declining over the past few months, driven down by BOJ’s ultra-easy monetary policy. The BOJ maintains an ultra-easy monetary policy, despite Japan’s CPI inflation index breaching the BOJ’s 2% target, reaching 2.1% for the first time in seven years. The BOJ and the Japanese government are in favour of a weak yen, as it makes Japanese exports more competitive and bond-buying cheaper. The combination of a weak currency and rising inflation, however, is burdening Japanese households.

This week, the BOJ Monetary Policy Meeting on the 17th is expected to have a strong impact on the Yen. Despite the rising inflation rates in Japan, the BOJ is expected to keep its interest rate the same, putting pressure on the Yen. Coming in the wake of the Fed and the BOE meetings, the BOJ meeting will likely emphasize the divergence between the BOJ’s fiscal policy and that of other major Central Banks, especially following the Fed’s steep rate hike. While other countries are moving towards quantitative tightening to return to pre-pandemic fiscal policies, Japan continues to pour money into the economy and maintains its negative interest rate. The difference in interest rates with other major Central Banks, especially with the Fed, puts the Yen at a disadvantage, driving its price down.

On Tuesday, the BOJ expanded bond-buying, to bring the yield on the 10-year Japanese government bond back within the 0.25% cap, after it had spiked to 0.33%. The BOJ continues to buy an unlimited amount of Japanese treasury bonds, defending their current low yield.  In contrast, the respective US 10-year bond is offered with a yield of over 3%, more than an order of magnitude higher than the Japanese bond. The large divergence in bond yields makes the low-yielding Yen less appealing to investors than the dollar, pushing its price further down.