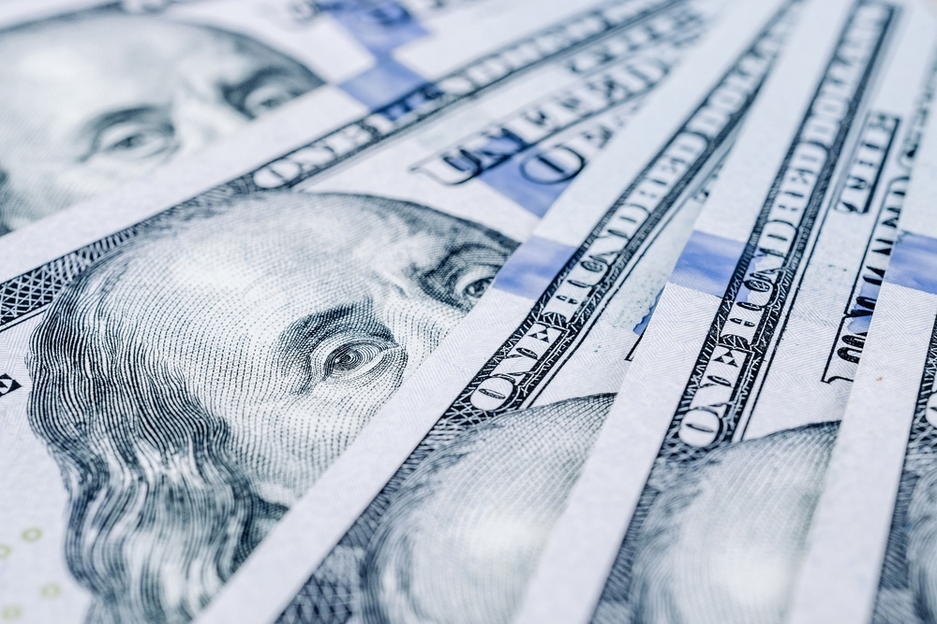 The dollar rose to a 20-year high early on Monday, with the dollar index rising to 104.19, but its rally was halted later in the day. The US dollar has been rising these past few weeks, surpassing its pandemic high of 2020, supported by hawkish Fed monetary policy. The currency fell later on Monday though, as it was moving in overbought territory. US yields also rose and then withdrew on Monday, with the US 10-year treasury note falling below 3.1%, after rising above 3.2% earlier in the day.

The dollar has been boosted by hawkish Fed policy and increased risk-aversion sentiment. Stock markets crashed on Monday, with global stocks suffering their worst day since 2020, driving investors to safe-haven assets. Continued Russian hostilities against Ukraine have increased risk-aversion sentiment these past two months, providing support for the safe-haven dollar. As there is still no end in sight to the crisis, the dollar’s appeal as an investment remains high.

Last week, the US Federal Reserve raised its benchmark interest rate by 50 base points to 1%. This is the first time that the Fed has performed such a steep rate hike since 2000. A rate hike of 50 bp, however, had been fully priced in by markets and some market participants were even anticipating a 75 bp rate hike. Markets have been pricing in a total of over 225 base points of additional interest rate hikes this year, with the main Fed rate expected to rise to 2.75%. The dollar plummeted after the Fed meeting last week, but rallied later in the week, as markets had time to digest the news.

Following the meeting, Fed Chair Jerome Powell stated firmly that the Fed is not considering a 75 bs rate hike for the next policy meetings. Powell’s statement dashed market expectations of an ultra-high rate hike in the following months, checking the dollars ascend.

The Fed also announced last week that it would move towards a policy of gradual quantitative tightening. The Fed’s balance sheet has risen to approximately 9 trillion USD during the pandemic and the US Central Bank has decided to start trimming its balance sheet.

Several FOMC Members are due to deliver speeches on Tuesday, which may cause some volatility for the dollar in the wake of the latest Fed meeting.

The Euro has been under pressure by the rising dollar these past few weeks, with the EUR/USD rate trading near the 1.050 level, below a five-year low. On Monday, the EUR/USD pair traded near the 1.055 level. If the EUR/USD rate declines, it may find support near the 2016 low around the 1.036 level. The outlook for the pair is still bearish, but if the currency pair goes up, it may encounter resistance at 1.118.

Increased risk-aversion sentiment and hawkish Fed policy have boosted the dollar at the expense of other currencies, with the Euro suffering heavy losses these past few weeks. Fears of an energy crisis in the EU also hold the Euro down, as the EU may announce an oil ban on Russian oil imports within the week.

The US Federal Reserve raised its benchmark interest rate by 50 base points last week, highlighting the difference in monetary policy between the EU and the US and driving the Euro down. The ECB has so far been hesitant to raise its interest rates though, as the Eurozone economy is still struggling to recover from the effects of the pandemic. The ECB is trying to avert a dangerous economic effect known as stagflation, the mix of economic stagnation and high inflation rates.

Eurozone CPI flash inflation estimates have risen by 7.5% on an annual basis, highlighting the problem of rising energy and commodity prices in the EU. Core CPI estimates rose to 3.5%, further increasing the likelihood of an ECB rate hike in July. Markets are pricing in 3 ECB rate hikes this year, of at least 25 base points each. This week, inflation data that are scheduled to be released for the Eurozone are expected to be even higher, as the effect of the increase in energy prices will be shown in April’s inflation data.

Many of the ECB’s members have repeatedly expressed concern about the high inflation levels in the EU and are in favor of taking immediate steps towards monetary policy normalization. ECB President Christine Lagarde is in favor of a more dovish stance, however, and has stated that Eurozone inflation is expected to rise in the following months, while economic growth is expected to stall. Even Lagarde however, has shown recent signs of wavering though, as rising inflationary pressures are forcing the ECB to act to drive inflation down.

German Buba President Joachim Nagel, who is one of the more hawkish ECB members, recently stated that he does not agree with avoiding monetary tightening in the EU. The divergence of opinions within the ECB is expected to cause some volatility in the currency leading to the next ECB policy meeting.

German Buba President Nagel is due to deliver a speech on Tuesday on “The Impact of the Russian Aggression on Inflation Prospects and Monetary Policy's Response". His speech will be followed closely by traders and may provide insight on ECB monetary policy, affecting the Euro.

The sterling has been under pressure for the past few weeks, falling against the dollar. The pound traded sideways against the dollar on Monday, with the GBP/USD pair moving around the 1.233 level. If the GBP/USD rate goes up, it may encounter resistance at the 1.331 level and further up near the 1.341 level, while if it declines, support may be found at 1.241 and further down near the two-year low at 1.206.

The Official BOE interest rate was announced last Thursday, just a day after the Fed announced that it would raise its benchmark interest rate by 50 base points. In a widely expected move, the Bank of England raised its benchmark interest rate on Thursday by 25 base points, after already performing three consecutive rate hikes in its previous meetings, bringing its rate to a 13-year high of 1%. Markets have already priced in approximately six BOE rate hikes this year, but it remains to be seen whether these expectations will be fulfilled.

In its official statement last week, the BOE stressed once more the dangers of recession, as the economic contraction is battling with inflation rates that are predicted to surge to 40-year highs of 10% in the coming months. The cost of living in the UK has been increasing, driven primarily by the high cost of energy imports, putting pressure on UK households. BOE Governor Andrew Bailey has recently stated that the BOE is walking a tight line between inflation and economic recession and warned of the risks of tightening monetary policy too fast.

In last week’s BOE and Fed meetings, we are starting to see a divergence between Fed and BOE policies, with the Fed moving towards a more aggressive economic tightening by raising its interest rate by 50 bp, versus the 25 bp of BOE’s interest raise. The difference between the Fed’s and the BOE’s stance over the past few weeks has been driving the sterling down and propping up the dollar, with most market participants becoming more modest in their expectations of a BOE rate hike.

Even though the Fed thwarted market expectations of a higher rate hike last Wednesday, investors still see the Fed adopting a more decisive approach towards tackling rising inflation rates than the more hesitant BOE. Interestingly enough, both Central Banks have now brought their interest rates to the same level of 1%, but the BOE is perceived to be slowing down, while the Fed is moving with a more aggressive pace.

The USD/JPY continued climbing last week, but its ascend was checked on Monday and the pair retreated to the 130.3 level. If USD/JPY continues to rise, it may find resistance at the 2002 high of 135.3. If the USD/JPY declines, support might be found near the 121.3 level and further down near the 118 level.

The primary driver of the Yen over the past few months has been the BOJ’s fiscal policy and has been pushed down by the persistently dovish stance of the BOJ. Bank of Japan officials acknowledge the impact on the Japanese economy from increased import costs due to the weak yen but persist in following an ultra-easy monetary policy to support the struggling economy. While other countries are moving towards quantitative tightening to return to pre-pandemic fiscal policies, Japan continues to pour money into the economy. Monetary policy meeting minutes released on Monday, confirmed that ongoing monetary easing remains necessary to boost the economy, adding more pressure on the Yen.

In its latest monetary policy meeting, the Bank of Japan continued its ultra-accommodating policy and massive stimulus program. The BOJ also maintained its negative interest rate of -0.10%, in contrast to other Central Banks, which are moving towards a policy normalization after the pandemic and are raising their benchmark interest rates. The difference in interest rates with other major Central Banks, especially with the Fed, puts the Yen at a disadvantage, driving its price down.

The BOJ Governor Haruhiko Kuroda has vowed to continue the bank’s ultra-easy monetary policy, stating that the weakening Yen is not part of the BOJ’s considerations. The BOJ also stated that it would continue to buy an unlimited amount of Japanese treasury bonds, defending their current low yield. Japan’s 10-year government bond yield is currently close to 0.25%, more than an order of magnitude lower than the respective US 10-year bond, which is offered with a yield close to 2.8%. The large divergence in bond yields makes the low-yielding Yen less appealing to investors than the dollar, pushing its price further down.