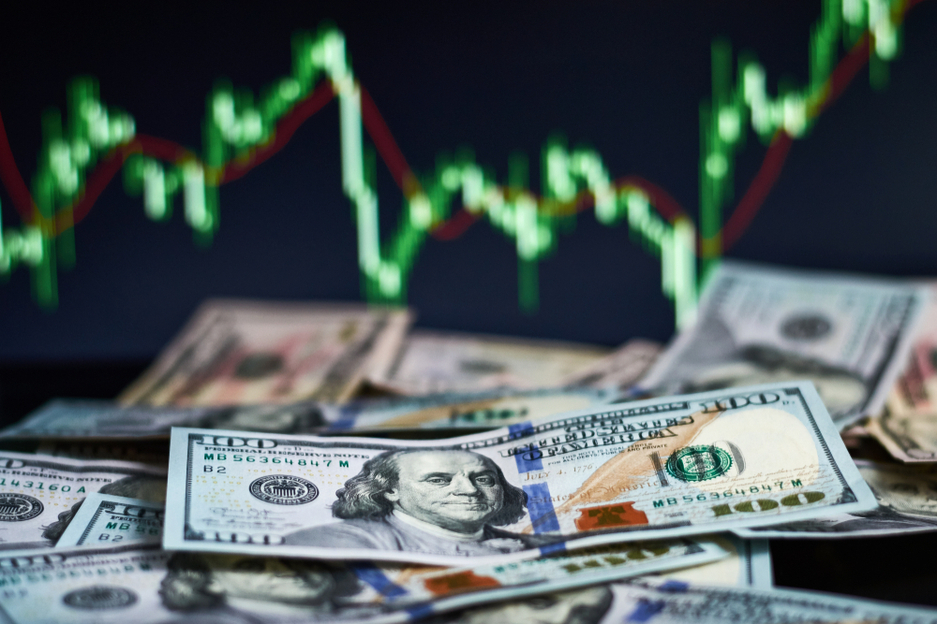 The dollar was buoyed by the Fed’s hawkish announcements last week, but this week started adjusting to lower levels, with the dollar index ranging between 96.30 and 95.83 on Wednesday. Earlier this week, statements from several FOMC members have led traders to doubt the aggressiveness of the Fed’s tightening policy. Federal Reserve Board members have stated that they expect fewer than 5 rate hikes this year, and support a more moderate policy than originally anticipated. When answering questions from the press, FOMC members seemed to consider that an increase of the Central Bank's interest rate by 50 base points in its next meeting in March would be excessive. As some investors were anticipating faster and sharper rate hikes, the comparatively dovish statements have pushed the dollar and US treasury yields down since the beginning of the week.

A number of key economic, employment and inflation indicators are scheduled to be released on Thursday for the US. These include: Final Services PMI, Unemployment Claims and ISM Services PMI. The release of these indicators may cause some volatility for the currency, as traders use these data to gauge the Fed’s future monetary policy.

Last week, the Euro weakened against the dollar, as the Fed showed clear intentions of tightening its monetary policy and raising its benchmark interest rate. This week, the BOE is also expected to move towards a more hawkish monetary policy and announce another rate hike. The ECB on the other hand, seems set to follow a dovish policy, which puts the Euro at a disadvantage.

On Thursday, traders will focus on the ECB meeting, in which the EU Central Bank’s interest rates are going to be decided. ECB President Christine Lagarde will give a press conference following the release of the Bank’s statement to communicate the ECB policy to investors and to answer questions from the press. Even though the EU Central Bank is not expected to change its interest rates any time soon, traders will scan the ECB’s statements for signs that the Central Bank might start moving towards a more hawkish direction. Many investors expect the ECB to shift its monetary policy within the year, yielding to inflation pressures in the Eurozone.

The Euro continue gaining strength against the dollar on Wednesday, as a number of economic indicators released showed a rise in inflation rates in the Eurozone. High inflation rates are putting pressure on the ECB to shift to a more hawkish fiscal policy. The EUR/USD rate climbed up to 1.133 as the Euro gained strength and the dollar weakened. The dollar is losing ground this week, as traders now expect that the Fed’s monetary policy will not be as aggressively hawkish as anticipated.  If the currency pair goes up, it may encounter resistance at 1.138 and further up at 1.148, while if it falls, support may be found around 1.275 and further down at 1.118.

Sterling continued its ascend on Wednesday, despite political instability threatening to end Boris Johnson’s premiership. On Monday, a heavily redacted report into the ‘party gate’ scandal was presented by Civil Servant Sue Grey, threatening Boris Johnson’s political future. The report is as yet unfinished and heavily censored, pending the conclusion of the Metropolitan Police investigation into the matter, but it contains heavy criticism against the actions of the British PM, finding ‘failures in leadership’. On Wednesday, Boris Johnson answered questions in parliament over breaking lockdown regulations, and faced calls to resign in a tumultus session.

British PM Boris Johnson visited Kiev on Tuesday, in an attempt, as some of his opponents say, to leave behind him the heavy political climate in the UK and deflect the public’s attention from the ongoing scandal. Boris Johnson showed his support to the Ukrainian government, threatening Russia with heavy economic sanctions in the event of an attack against Ukraine. Ukrainian Prime Minister Denys Shmyhal and his Polish counterpart, Mateusz Morawiecki, announced on Tuesday that they were working with Britain to cooperate in the face of "Russian aggression."

The sterling edged higher on Tuesday with GBP/USD climbing above 1.358, benefitting from a weaker dollar. If the GBP/USD rate continues its ascend, there may be resistance at the 1.375 level, while if it declines, support may be found at 1.332 and further down at 1.317.

The sterling continues rising in expectations that the Bank of England will raise its benchmark interest rate in its meeting on Thursday. Heavy volatility is expected on Thursday for the GBP, following the UK Central Bank’s rate announcement and the ensuing speech by BOE Governor Andrew Bailey. Many investors expect that the BOE, which has already increased interest rates in December from 0.1% to 0.25%, will continue its hawkish monetary policy and will raise interest rates by another 25 base points, to a total of 0.5%.

The Yen remains at its lowest levels in decades, creating problems for households, as imported goods, especially food and energy, are becoming increasingly expensive for Japanese households.  Gasoline prices in Japan continue rising, hitting the highest level in 13 years, despite emergency measures to keep the price down.

The BOJ’s dovish monetary policy is creating a gap in interest rates between other major Central Banks, especially the Fed and the BoE who are moving towards raising their benchmark interest rates. The disparity in interest rates between the BOJ and other major Central Banks is hurting the currency, increasing the price of imports. The Japanese vice finance minister for international affairs, Masato Kanda, stated on Tuesday that the weak Yen has its advantages, such as highly competitive exported goods, but recognises the downsides of a weak currency, which might point to a change in fiscal policy in the future.

The Yen gained strength against a softer dollar on Wednesday, with the USD/JPY rate declining and trading below its 114.8 support, going as low as 114.42. If the pair continues declining, further support might be found at 113.48, while if it gains strength, it may find resistance at 115.6 and 116.